I am pleased to report that I’m back to riding my trusty scooter.  Rollin’ carefree down the road, wind blowing through my hair, waving at the other cool kids….  Or not.  Getting it back from Sacramento was a much less harrowing experience than getting it down there.  Thankfully the mechanic took pity on me and lashed it down to the trailer in a much more efficient manner than I did.  Those stupid ratchet straps seriously baffle me, I never can figure them out.  Of course then I almost never figured out how to get the stupid things released once I got home.  I was contemplating just cutting them when one finally let go.  Seemed a shame since I just bought them at the uhaul store, but I was desperate.

I guess that was sort of a hit-and-miss weekend.  Friday was something of a letdown.  Determined to enjoy my afternoon, I headed up to nearby Ruff Haus to celebrate the end of the work-week.  A rather boring experience, as it turned out.  I had a mug and some french fries, then gave it up and headed home.  As I should have already been aware, I was just as happy sitting on my own back porch watching TV.  Heck of a lot cheaper too.  Grilled up a pizza and enjoyed the nice weather until the sun went down and it got too chilly.

Saturday was a bust.  I was scheduled to work that evening, so the day was spent pretty much waiting around for that.  We did take a nice long walk, four miles to be exact.  We’ve been trying to get some strolls in, and that was our longest yet.  Teagan is enjoying our new-found past time for sure.  She does enjoy a nice walk, and I think she’s slowly getting a little better with her leash manners.  As long as you don’t pass any other pups, or see a lizard, or a leaf blows by, or any other type of distraction, you can pretty much manage her.

Sunday we somewhat made up for the previous day’s boredom.  Donette was hosting her first Oscar party, and she had quite a bit of work to do before her friends came over.  She spent the better part of the day cooking and cleaning, while I somewhat ineffectively tried to help out.  We managed to travel up to a friend’s open house party in the middle of it all, if only for a short bit.  We actually could only stay ten minutes and had to race back to our house.  Sure enough, her first guest showed up right as we pulled in the drive;  Perfect timing.  The boys were banned from the event, so several of us met up at 36 Handles and played darts for a few hours. I’m not much of a dart player, but it certainly passed the time.  Eventually we got a little bored (and hungry) though, so we crashed the party and ate up all the leftovers.

As a bit of left-over news from last week, I did indeed try out my new paella pan Monday night.  I thought the results quite passable indeed.  If nothing else, I had fun cooking it.  I put together a step-by-step photo-album of the fun, or at least I tried.  I ordered the pictures chronologically, but for some reason if you click through the full size ones they are all mixed up.  Oh well, it’s the thought that counts.

Speaking of pics, I’m somewhat short on them this week.  Here’s, uh, a shot of Doni’s new curtains in the dining room though… 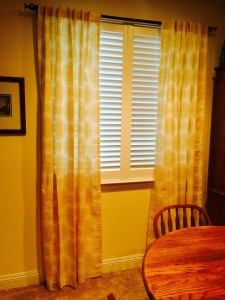 4 thoughts on “Scootin’ Down the Road”